Lottery ticket insulted the national feeling of the player 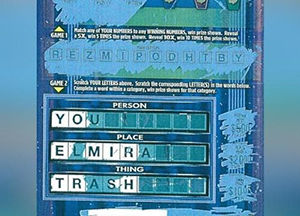 The player from Elmira, New York got a lottery scratch-off ticket that reads ‘You Elmira Trash’ The officials at New York lottery explain that the received insulting ticket that the player got was just a silly coincidence, but the man is not sure in this.

Several weeks ago, a 22-year-old student Nick Lynough from Elmira, New York, bought a Wheel of Fortune $5 ticket in a bar from a machine. When he scratched away the cover, he got a shock as the ticker read “You Elmira Trash” in the ticket’s fields Person, Place and Things.

As Nick Lynough revealed to the ABC News, he is absolutely sure that this was “fake and tampered with.” He was caught by anger when realized that he was abused as a native Elmira citizen by the International Game Technology (IGT), which sold the ticket to him. Lynough turned to the Sheriff in the Chemung County Office to ask for the investigation of the case.

Christopher Moss, the Sheriff, applied to the lottery authorities as to the ticket. After their investigation they came to the conclusion that “unfortunate arrangement of words on this individual ticket was completely random, coincidental and – most importantly – unintentional.”

When New York Gaming Commission weighed in on the brouhaha, it concluded that the possibility that these words appear all together is “one in 900m”, while the chances to win a jackpot in the Mega Millions are one in 258 million, in the Powerball – one in 175 million.

Sheriff Moss agreed with the results of the investigation. However, Lynough is rather sceptical. At the same time, IGT was insisted to take away the word “trash” from the winning combinations in the Wheel of Fortune tickets. Our previous news regarding the lotteries: Do state lotteries gain profit