A new Nobu Hotel is open in Philippines by Robert de Niro.

A new resort-casino complex was open by the Oscar-winning actor on Monday, which is the first step to the expansion of the Philippines gambling market

Famous Hollywood actor Robert de Niro decided to become a gambling magnate. He and his partners opened Asia’s first Nobu Hotel Casino in the capital of the Philippines, Manila, thus continuing the global expansion of this luxury brand.

The luxurious 321-room hotel was opened on Monday in the entertainment complex City of Dreams Manila. Gambling establishment, which is part of the integrated resort, is located right on the waterfront. The opening ceremony was traditionally accompanied by the performance of a whole army of drummers, and streams of gold and silver confetti were poured from the sky.

The face of Nobu hospitality is one of the most famous Hollywood actors – Robert De Niro. In addition to his part of the network, the owners of the gambling establishment are also a well-known Japanese restaurateur Nobu Matsuhisa and a Hollywood producer Meir Teper. Australian billionaire James Packer and a gambling Macau tycoon Lawrence Ho, the co-owner of Melco Crown Entertainment, joint the Philippine project to invest money. 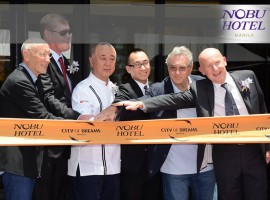 De Niro told the press that he is the rightful owner of the project, not only an advertising sign. Under the guise of Nobu Hotels over the next two years, it is supposed to open the other eight large entertainment complexes, consisting of hotels and casinos. The government of the Philippines is ready to attract foreign investors to invest money in their gambling opportunities, building entertainment facilities not only in Manila.

Two investors, Macau Resources Group with the Sino-American Gaming Investment Group, are planning to spend $650 million to acquire 14 hectares of the territory in Mactan, Cebu to open a casino resort complex Mactan Leisure City. This will include 3 seven- star hotels with a city mall, providing the island with 6000 vacancies and millions of dollars in revenue.

The mayor of Mactan likes the idea, and if the city council approves it and sends a letter to Philippine Amusement and Gaming Corp. (PAGCOR), the complex will be finished by the year 2017.

Our previuos news regarding the best casinos: Riviera Hotel and Casino shuts its doors after 60 years.