800-year old casino found in the State of Utah

Finding, made by scientists in one of the caves at Great Salt Lake in the American state of Utah, can turn all the history of gambling houses’ appearance upside down.

The found carved sticks, hoops, cubes and elements of darts date back to the XIII century in the number of about 10 thousand units can be the certificate that gaming prospered long before bright colors of Las Vegas appeared.

Archaeologists agree in the opinion that they belong to indigenous people still unknown to science who lived on the coast of Great Salt Lake during this period. In the 1930s, scientists found clothes, moccasins and heaps of bones of bison and elk in one of the caves of this region. However, opening of a 800-year gambling place reveals the deeper secrets about culture and life of these people. Instead of dragging miserable existence, local tribes lived in relative luxury and had some free time for gambling. Archaeologists also consider that gambling, perhaps, played a crucial role when forming the new relations of these people with the neighbors and between each other. 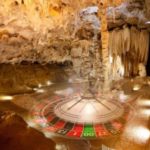 According to professor Jack Ives, the archeologist from University Alberta, the number and a variety of the found game artifacts in only one cave is comparable to the volume of similar finds in the territory of all western part of North America.

Game dice are made of the processed pieces of reed, and points on them are cut out or burned out by fire. The small hoops, made of juniper bark, were used for throwing darts through them when rolling them on the ground or throwing them in the air.

The majority of finds were near the entrance to the cave, round the big center which could serve as a place of gathering for locals. Gabriel Yanicki added.

Besides, some of the artifacts also reveal that locals contacted people from faraway places. So, one of the dice is made of beaver’s tooth, wrapped in sinews, is similarly found on the coast of the State of Oregon. And the carved stick in the form of a spiral reminds the subjects found earlier in British Columbia.

In California Soboba Band of Luiseno Indians tribal casino planned to celebrate their 20th anniversary in a specific way, by sending the slot called “Icarus” in partnership with JP Aerospace on June 14 and giving an Out Of This World Party in Soboba establishment on June 27.