Scientific Games made a bargain with Bally’s purchase for $5.1 billion

On Friday a $5.1 billion acquisition of the slot producer Bally Technologies, Inc. was made by Scientific Games.

The Nevada Gaming Commission approved the merge of Scientific Games Corporation, New York lottery system and equipment provider, with Bally Technologies, Inc. with a solid final regulatory approbation on Thursday. After the approbation the company declared that they were going to finish the Bally Technologies merger on the next day (November, 21st).

Situated in Las Vegas, Bally technologies is one of the leading suppliers of gambling equipment in this industry. It will be a subsidiary of one of the biggest in the world providers of lottery system and gaming equipment.

Scientific Games has already bought WMS Industries for $1.5 billion in 2013. Bally has bought table gaming supplier SHFL entertainment for $1.3 billion. As a result, these four companies are now under the control of Scientific Games Corporation. Scientific Games is ready to pay $83.30 per share to buy all distinguished shares of Bally Inc. that are valued in the amount of $3.3 billion. At the same time company is appropriating $1.8 billion in debt.

Scientific Games CEO Gavin Isaacs commented in his report, “The deal with the Bally united two leading gaming providers with similar culture and customer concern. We are happy to get a chance of producing the best possible gambling goods based on the experience of the two organizations.” 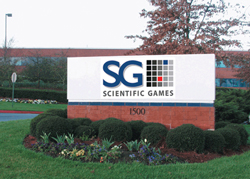 $235 million in savings are expected to receive thanks to this deal. And Scientific Games CEO anticipated getting a lot of savings during the first year of the cooperation. The two organizations are planning to receive $3 billion revenue per year. Scientific Games CEO also introduced a new executive structure of managing the company and touched all the spheres of gambling: slots, table games, lotteries, interactive gambling, casino and lottery systems.

“The new leadership team consists of the best executives in the lottery, gaming and interactive aspects. I’m glad to work with such a prominent team of professionals from Bally, WMS, SHFL entertainment and Scientific Games and I’m sure this will lead the company to success,” Isaac admits.